As a performer, Nic has been honored widely. In 1987, he was awarded the Bronze Medal at Her Royal Majesty’s International Festival Competition in Aberdeen, Scotland (UK). Orbovich was also a semi-finalist at the 1995 Fischoff National Chamber Music Competition as a member of the Amherst String Quartet. In 2001, he was featured as a soloist on the Grammy Award nominated release, “The Hot Springs Music Festival: Louis Moreau Gottschalk” (Naxos). That same year, Nic was a prominent figure in the Emmy Award winning documentary, “The Sound of Dreams.” In 2008, Nic was concertmaster on a “Top Ten of the Year” selection of Gramophone Magazine, “Rudolf Haken; Concertos” (Naxos). He has soloed with numerous orchestras around the country, having performed concertos and brilliante works by Wieniawski, Vieuxtemps, Sarasate, J.S. Bach, Beethoven, and Vivaldi

He enjoys a reputation as an outstanding recording artist in many genres. Besides the aforementioned Grammy nominee and Gramophone magazine award winner, Nic appears in “The Hot Springs Music Festival; Creole Romantic Composers” (2001-Naxos), “Music of Jerome Moross” (2002-Naxos), “Music of Jerome Starer” (1997-Albany), and appears on an album of jazz violinist Diane Delin.

As an orchestral performer, his work is prolific. Nic has been concertmaster of the South Bend Symphony, the Hot Springs Festival Orchestra, the Southwest Michigan Symphony, the LaPorte Symphony, the Lake Shore Symphony and many others. In this role, he has performed on stage with some of the most acclaimed names in classical music. Some of those names include; Itzhak Perlman, Gidon Kremer, Joshua Bell, Andre Watts, Hilary Hahn, Lang Lang, Garrick Ohlson, Shlomo Mintz, Daniel Barenboim, Lorin Maazel, Leonard Slatkin, and Sir Georg Solti. Currently, he holds the Principal Second Violin chair with the South Bend Symphony Orchestra (SBSO), where he is also a member of the SBSO String Quartet and String Quintet, performing over 20 concerts a year with those chamber ensembles.

Until the concert and recital season gets back on track, enjoy these virtual performances.

Watch and Listen to Nic

Colleagues and Press Acclaim the Musicianship of Nic

“I enjoyed listening to (Nic’s) performance … I think (he) has something very special to say with (his) music.”

“…(Nic’s) technical ability is world-class, and his interpretations and style is impeccable…”

There are no upcoming events to display at this time.

Let’s get in touch! 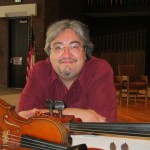 Thank you for visiting my site. I hope you found the information useful and you learned something new about me. If you need more information about availability, teaching schedules and performance opportunities, please send me a note or give me a call. I look forward to hearing from you soon!

Send me a message